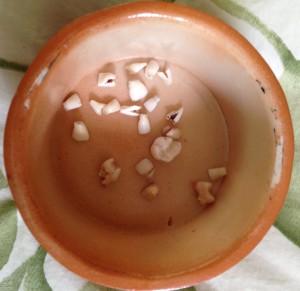 This bowl of teeth lives in the back of my closet.

It’s a mixture of both kids’ teeth and there is no reason for them to be there. None. Except I can’t throw them out and I have no plan.

I never really thought this whole Tooth Fairy job out.

It just sort of happened.

I can remember when my son had his first wiggly tooth.

“Shit!?! That is happening already,” I remember thinking. Guess I need to figure out what I’m going to do.

I typed “Tooth Fairy ideas” into Google (this was before Pinterest was big, if you can imagine such a time). There were some wonderful ideas that I was absolutely going to make. I remember this organizer that had little pockets that you sew and then you embroidered the tooth location and date it was lost. It rolled up and was just perfect.

I was going to be the best Tooth Fairy ever.

In a way, it’s precious how cute I was. I was all excited about baby teeth and thought it was going to be a lovely memento of their childhood I’d cherish forever.

While that clearly didn’t happen, I did manage to make a little pillow to hold the tooth. I sewed it by hand out of an old wool sweater and needle-felted a fairy on the front. It’s just darling. I wanted to take a picture of it to show you, but it’s lost in my son’s room.

It was replaced with something he crafted out of Lego’s several teeth ago anyway.

Luckily the first teeth are loose for some time and I got the pillow made before the first baby tooth left the mouth.

However, that is as far as my planning went.

We were at the State Fair and my boy’s tooth fell out while he was eating a hot dog.

It was such an exciting moment for him. He was so happy and kept telling everyone we met.

Me? I was screaming inside, “oh no!! I don’t have anything ready and we are going to get home late from the fair and I’m so TIRED!”

Did I just give him a quarter and call it a day?

I put his tooth into a little jar in my closet, promising myself that I’d figure out something great before the next tooth.

Then I stayed up until well after midnight needle-felting a little cow (since he was obsessed with cows at the time). I wrote a lengthy letter to him in teensy-tiny writing about how happy I was he finally lost his first tooth. It might even have rhymed. I sprinkled glitter all over his bed.

Basically, I set the bar WAY too high folks.

I established the expectation that the Tooth Fairy crafts you little things AND writes you heartfelt letters.

You’d think after making such a bold decision, that I’d use all my spare time to stock up on some little handcrafted gifts for when the next tooth fell out.

Every single time I am handed a blooded stump of tooth, I’m caught off guard. As if I have no idea that they are going to keep losing teeth.

The Tooth Fairy would then stay up all night trying to pull together something amazing.

Ridiculously tiny letters gushing about how beautiful they are inside and out.

But lately, my boy has started losing his molars. I don’t remember losing teeth at 10-years-old, but his dentist assures me this is a real thing and he is not just yanking them out.

I actually asked that.

The first molar fell out at the most inconvenient of times. Dad was out-of-town, mom had crafted all day and he was supposed to be sleeping.

“My tooth fell out,” he screams as I finally settle in to watch an old episode of “Saturday Night Live” with a beer in hand at 9 p.m.

“I thought you were asleep,” I mutter and usher him back to bed.

I had no creative juices left. Nothing.

After scouring the house for 10 minutes, I shoved $5 in his Lego contraption, made a trail of little gems around it and called it a night.

“Mom,” my boy says crawling into bed the next morning. “The Tooth Fairy left me money and no note. That’s the first time she didn’t write me.”

He seemed disappointed and let down.

So the next night, right at bedtime, he pulled out another tooth.

Dad was still out-of-town and I had no cash left.

I scoured my craft supplies for something to make and I had nothing.

Not a single idea.

So I gathered up some quarters and wrote him a long note about how much the Tooth Fairy can’t believe he has grown and that it was time she gave him a “Fairy Kiss.”

I sprinkled glitter all over his face and his bed.

“Mom!” he came running in the next morning. “The Fairy left me a kiss. Look! It’s on my cheek.”

I patted myself on the back and basked in his happiness.

While this Tooth Fairy isn’t perfect, sometimes she pulls it off. There are moments of magic that I’ve been lucky enough to create for my children that I will forever cherish.

No, I am not as organized as I’d like to be.

But sometimes I create magic.

4 thoughts on “Looking for Tooth Fairy ideas? You won’t find them here”