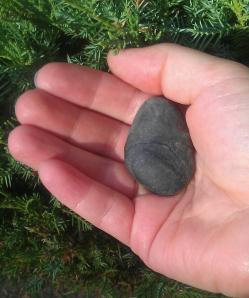 As they filed passed her, she grabbed a smooth stone from the basket and placed it into their waiting hands. In silence they accepted the stone and lined up outside the classroom.

For the next 20 minutes or so they walked in complete silence. Some clutched the stone toward their chest. Others tossed it in the air occasionally letting it fall to the ground. All were silent.

They followed their teacher as she led them off the school campus, across the street, through the neighborhood to a well-worn path that cut down to the river.

Forming a line along the river’s edge, the children watched their teacher and mimicked her movements. She held the stone out in front of her with both hands. She closed her eyes. When she opened them she threw the stone out into the river and watched the ripple cascade out from where it fell. Recognizing their cue, all the children started tossing in their stones. They stood quietly watching where they fell.

Stepping back from the river they formed a circle.

“I was thinking how I need to be nicer to my brother.”

“I want to do more things for my dog.”

“I want to work on my patience.”

“I think I can listen to my mom more.”

After sharing, the class sang several songs they had prepared for the day. The songs were filled with glee and hopefulness.

The walk back was anything but quiet. Lots of silliness, giggling and reflection.

“That was weird not talking, but cool.”

“I think we could have surprised a deer!”

Once in the classroom they had the traditional snack of apples and honey.

The teacher then presented the children with a new stone and said “Shanah Tovah,” which means “Good Year.”

The stones that were thrown in the river represented things to “cast off” from the previous year. The new stone represents the year to come.

These are 8- and 9-year-old children who walked in complete silence for almost 30 minutes AND participated in self-reflection.

Next week the children will be building temporary structures called sukkah’s and the week will culminate in an evening feast for all the families.

I feel so lucky to have witnessed this beautiful example of reverence and reflection that is at the heart of Waldorf education.

I was even able to cast my own stone into the water. As I watched it sink to the bottom I tried to let all my pain, anger and sadness sink with it.

I’m doing work, my friends. I am starting to feel hope. Thanks for all the kind words and hugs. They have not gone unnoticed or unappreciated.

One thought on “Casting stones with third graders”