There is a pile of cut yarn outside my bedroom door, and five stuffed animals hang from the bannister having “flying lessons.” Every box from Christmas I put in the garage to break down, is back in the house in various stages of transformation, surrounded by tape, scissors and markers.

The dining room table is home to a puzzle on week three of progress, and a half-completed robot model. Stacks of books fill every flattish surface, teeny-tiny scraps of paper are cut up and have been thrown confetti-style down the halls, and two tiny plants appear to be in the process of being repotted by someone in the bathroom sink.

The state of my house is not good, folks. It is a cluttered mess of intentions and creation. We are a family who likes to do things, make things, get lost in the “thing,” and what we seem to hate the most is admitting the thing is over.

If the puzzle is put away, it means we didn’t finish it.

If the books are on a shelf, they may not get read.

If we clean up the boxes, the fort will never be completed.

We are a family of potential.

I have been fighting this for a long time.

I would walk around the house picking up all the messes, bitching as I do, and feeling the overwhelming sense of futility as I turn around to see several new “projects” erupting behind me.

It was driving me crazy. Ask my kids. I had become the Cleaning Dictator often yelling “take this shit to your room” and “what the hell is this mess?” and “are you kidding me?”

I’d march around in full martyr-mode, always feeling a sense of being overwhelmed or buried by ALL THE STUFF. I’d throw projects away because I’d get tired of seeing them or throw everything into a closet and slam the door to have ONE EMPTY SPACE.

Part of this battle was because my insides were in turmoil and I needed my space to not be. I needed everything organized, because I couldn’t categorize all the messy, dirty feelings which weighed me down and made it impossible for me to move.

Another part was embarrassment, of imaging what people would think if they stumbled into our “in progress” home on a day I didn’t frantically shove things into closets or drawers. They might think I am lazy or I don’t give a shit about my family.

I was losing my mind over it.

I was on the verge of completely squashing my kid’s creativity, because I could not contain it.

I could not stand it.

Then I started writing again.

My writing is a mess; the characters are unformed, stumbling along trying to become real and struggling with the half-story I’ve placed them in. I’m having to slowly uncover the pieces and letting it be a jumble for now, while I figure out how it all fits together.

It almost stopped me completely.

I’m accepting this mess is part of the creative process, and I’m trying to explore it with patience and curiosity. It’s hard to ignore the unease it brings, but it is necessary. I am not going to just sit down and write a novel. It is a chaotic, disorganized and jumbled process which requires both ignoring my fears and embracing them.

But doing this, being in the trenches, has made me look at the mess of my house, and even my kids, in a different way.

I’ve always been supportive of open play and creativity, actively fighting to provide them the space and time for it; we drive 25 minutes so they can attend a Waldorf school which is in line with these ideals. But at the same time, I’ve been a nagging bitch about the messes which come along with it.

Contradictions are apparently my thing.

There is a big part of me which would love my house to look like Restoration Hardware; seriously, everything in that store is gleaming and beautiful and fucking rad.

But it never will.

I can’t remove the mess, because WE are the mess. I’d be replacing all the little stories they create with their stuffed animals, all the pictures they draw, all the badges and houses and forts…for some idealistic version of a home I’d probably hate.

I want my kids being loud and crazy and wild.

I want them making shit out of everything.

I want my kids to know their ideas are worth exploring fully.

The dishes and laundry are done. There isn’t anything rotting or smelling bad in the house. It is just projects, crafts and imagination exploding out in all directions.

It is the chaos of a creative life.

There is an important lesson for us all to learn about finishing things, cleaning up after ourselves and respecting the space of others. I’m not throwing up my hands in defeat. There is plenty of work to do still, and I’m sure we can get there.

For now, though, I want to stop yelling and allow more space and time for the messy creativity to happen. I want to stop struggling so hard against it, and learn to give things the time they need.

Maybe I can even learn to love the mess as much as I love the kids who create it.

But I can stop how I react and realize how temporary this all is.

So, bring on the Styrofoam sinks: 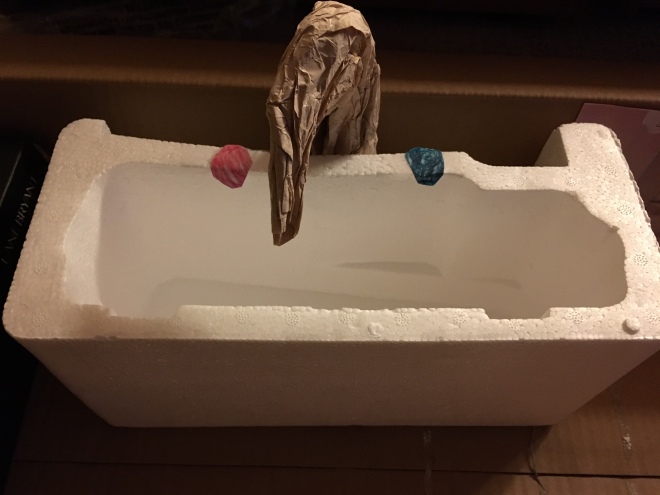 The random piles of coins:

Because we live here and this is what we do.